How we do it

7 Steps To Accomplish Your Real Estate Goals in 2021

I'm Jennifer Myers, Founder of Agent Grad School and host of Confessions of a Top Producing Real Estate Agent, The Agent Grad School Podcast.  My goal for each episode is to give you actionable steps you can implement today to grow your real estate business.

When you think about having the real estate business and life outside your business you’ve always wanted what comes to mind?

For most of us, there is a moment of dreaming big followed at some point by a thought like, “I’ll never be able to have that.” Or, something along the lines of “Sounds great, but I have no idea how to make that happen.”

Why do we do this to ourselves?

Life is too short not to have it be exactly the way we want it to be.

Like, why can’t you be a successful real estate agent and have a great life too?   Make good money and have some free time to enjoy it…that doesn’t seem like an impossible dream to me.

It’s not asking for too much out of life, yet so many agents I talk to think a life like this is not in the cards for them.

With that thinking in mind, I recently did a class for our students called How To Get Anything You Want in 2021.  It had a big impact on all of us and a few tears were shed too.

Why?  Because once you realize what you reallllllly want in life and how you’ve been holding yourself back, it can bring up a lot of emotions–sadness, anger, frustration, and after all that comes hope and then finally the thing that matters most–action.

In today’s workshop-style episode of Confessions of A Top Producing Real Estate Agent, I’m walking you through the same process so you can make what you want happen this year too.

And, because as Lee Iacocca said, “The disciple of writing something down is the first step to making it happen,” I’m also giving you a free workbook for you to use as I walk you through the 7 Steps to Get Anything You Want in 2021.

You can get that here: 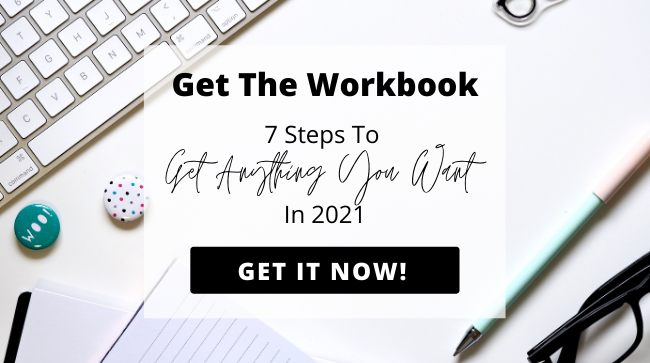 Having anything you want this year is not a catch phrase and it’s not too good to be true.  It’s something each one of us is capable of, but only if we remove what’s in the way.

This 7 step process will help you do that.

Don’t just wait and see what happens, decide to make it happen.

​​Not in a stressful way, but in a “I’m worthy and capable” kind of way.

back to all episodes

Stop Doing Listing Presentations, Do This Instead »

too good to miss

No more FOMO.  Never miss a thing and always be in the know.  Get every episode delivered right to your inbox.

How They Did It

Looking for something specific?

We've probably done an episode about it.  Enter what you're looking for below and see what pops up.

free resource for that

Love what you're hearing on the podcast?
It's only the tip of the iceberg.
Learn how we can help you reach your goals even faster.

how we do it