How we do it

How To Deal With Difficult Clients

I'm Jennifer Myers, Founder of Agent Grad School and host of Confessions of a Top Producing Real Estate Agent, The Agent Grad School Podcast.  My goal for each episode is to give you actionable steps you can implement today to grow your real estate business.

We all deal with difficult clients sometimes.

It can be a frustrating experience and even sometimes make us rethink whether being a real estate agent is something we want to continue to do.

Here’s something to keep in mind when you run into a difficult client:

Difficult clients can be one of our biggest growth opportunities.

They allow us to hone our skills in one of the following ways:

1.) An opportunity to become a better communicator

2.) An opportunity to solve problems in new ways

3.) An opportunity to create better systems and processes in our business

4.) An opportunity to become even more an expert in our market

Some difficult clients allow us to find new ways to help our clients reach their goals and become even better real estate agents.

While others don’t value our expertise or don’t really want our help. They can be combative and a person you dread seeing every week. We work way too much to spend hours in a car every weekend with people like that.

So, how can you know the difference between a client who needs your help, maybe just in a new way or if they are a client that just isn’t a good fit and needs to be let go?

Listen in to today’s episode and learn: 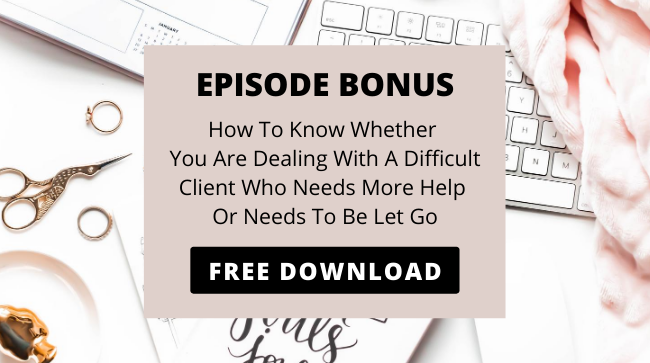 Links mentioned in this episode:

Free Download: How To Know Whether You Are Dealing With A Difficult Client Who Needs More Help Or Needs To Be Let Go

back to all episodes

Get Clients A House When There Is No Inventory »

« July 2020 Book Club Discussion: Be So Good They Can’t Ignore You By Cal Newport

too good to miss

No more FOMO.  Never miss a thing and always be in the know.  Get every episode delivered right to your inbox.

How They Did It

Looking for something specific?

We've probably done an episode about it.  Enter what you're looking for below and see what pops up.

free resource for that

Love what you're hearing on the podcast?
It's only the tip of the iceberg.
Learn how we can help you reach your goals even faster.

how we do it